Dineke Oosting is a master in creating worlds; all of them taking on a slightly different manifestation, and communicated via different media. Their common denominator, however, is that they are a refuge for dreams and fantasies. The works breathe considerable freedom and evoke both endearment and humour.
When I first saw one of her works called “Tuppercity” (Plastic Stad (Plastic City), 1996), it immediately reminded me of my box with coloured plastic building stones I used to play with for hours. This colourful metropolis, constructed of all kinds of Tupperware material, thermos flasks, and other plastic articles of everyday use, were unfolded at the spectators’ eyes on a long windowsill in one of the rooms of Niggendijker art initiative (Groningen). This densely built, elongated surface with many high-rise blocks is inhabited with innumerable diligent people, taken from modelling, and each of them wrapped up in their daily worries. The metropolis was built in the same way many of us used to do with blocks and plastic consumer items. The principle of piling and grouping identical forms plays an important role in this. “Tuppercity” has the radiation of a large city, but is small in its physical capacity, certainly when seen against a background of high monumental windows such as at Niggendijker’s. Striking is the fact that this work has distinct aesthetic qualities in addition to its playful character. The proportion of forms and the multitude of fresh colours especially leap to the eye. The light pouring in through the large windows enhances these dimensions in the work even further. These things reveal Oosting’s background; during her study at the Minerva art academy in Groningen, painting was one of her principal activities for a considerable amount of time. She was interested in visual patterns: patterns in packing paper or wallpaper, or patterns that could be distilled from paintings or photography. Oosting is fascinated by schematic realities: realities reduced to colour and form and which are extremely elementary in their appearance. At the base of “Tuppercity”, for instance, is the observation of rows of plastic coloured cups in shop shelves.

In a three-dimensional work titled “Landschap” (Landscape), elements from Italian landscape are taken as its basic assumption. The design is inspired by landscapes with buildings from 15th century Italian historic paintings. During her graduation at the Minerva academy in 1995, Oosting presented a large round bin supported by a table; in it a stack of stones surrounded by a hedge of plants and cactuses. The stone mountain was equipped with a collection of colourful cardboard houses and towers. Lampposts were included as a current-day addition. Here, Oosting sketches a miniature depiction of a landscape that regularly figured in 15th century Italian painting. The 15th century art of painting, and Dutch 16th century painting, has a design of landscapes that now often fills us with endearment. Works by Brueghel de Oudere, Jeroen Bosch, and Quinten Matsys show “miniature worlds”. We do not consider the construction of their art of painting very developed; it provides associations with worlds we see in toy stores, for instance. With all due respect, these art-historical works show very schematic realities within our current reception. They are the realities that strongly appeal to Oosting and which take her back to her first childhood observations. Impressions received during childhood knit patterns in one’s observation throughout the rest of one’s life. The earliest observations are probing enough to make them of great value, yet they are related to small worlds by definition. Naturally, toys are the best instruments to obtain a hold of reality. By playing with attributes that mirror the big world, we learn to control it. Through her work, Oosting allows us to, once more, become acquainted with the small universes with which we grew up; she stimulates our imagination and incites feelings of freedom. A work which I think symbolises the value of our earliest perceptions, and the imagination it evoked, is “Neue Welt” (New World) (2001). It consists of a small mountain of papier-mâché under a glass bell-jar, covered and surrounded with small plastic flowers and plants, a rabbit and two astronauts (Playmobil figures). One used to lose one’s head over fantastic worlds like these; it formed the focus of all kinds of wild stories and fantasies. It is as if, through this work, Oosting preaches to cherish and maintain such openness and imagination.
“Insel I, II en III” (Island I, II, and III) (2001) are small platforms, moveable by wheels (27 x 60 x 35 cm on average) on which peculiar worlds of plastic and wood have been constructed, and which stand midway between an old-fashioned amusement park and the exhibition area of a world exhibition. This makes them places on a micro format where our imagination and amazement have full scope. Their mobility makes one suspect that they incite the spectators to a constantly moving, imaginative, and free way of thinking.

Oosting’s work contains much comedy, such as her ceramic landscapes “Eiland I” (Island I) (1999), “Eiland met bomen” (Island with trees) (1999), and “Landschapje aan de muur” (Little island on the wall) (2000) (wall object for a private person in Groningen) that might be entourages for the Thunderbirds or the Flintstones. They are not particularly refined landscapes, but they do have an enormous comic effect in their heavy and awkward accentuation (bumps, shells, and flowers). Then there are the photo works that form registrations of “animated” worlds. Miniature figures (from model making) are feeling a melon. “It is ripe” (1999) is one of the workman’s conclusions. He is in the ration of the melon as a mountaineer to a gigantic rock. In the “Schrobben” (Scrubbing) (1999) picture, two industrious cleaning women are caught cleaning the drain of a sink. “Flips” (1999) shows a parade of crisps on sticks heading for a red bowl.
These photographs show a world that reminds of the world of the Swiss duo Peter Fischli and David Weiss. These artists play an ingenious game with all kinds of everyday objects, which are placed in such a line-up that they loose their trusted identity in order to transform into set pieces in a bizarre, playful reality. Oosting does not only operate this transformation principle in her photographs. In “Tupper City” and “Insel I, II en III” (Island I, II, and III), plastic appliances are set up in such a way that they loose their original function to take on an entirely new identity.

In March/April 2002, Oosting exhibited a number of assembled buildings to scale in a period room of Kunstlievend Genootschap Pictura in Groningen (“In Holland staat een huis”, 2002). The buildings, the style of which strongly resembles the utopian tinted modernist architecture of the twenties of the last century, are made of waste wood, fruit cases, drainers, a magazine stand, a reed basket, etc. They are displayed on a multicoloured carpet under a chandelier, and can be admired from a distance from behind a museum cord which separates the audience from expensive works of art. One looks down on them as a spectator and optimally experiences their relativistic working. Grandiloquent ideas about art and architecture seem to be slightly mocked this way. But this is not the work’s only quality. As is the case in many other of Oosting’s works, the whole also radiates sensuality as a result of the use of forms and colour.

Light-footedness is an important quality in Oosting’s work, but a certain melancholy can also be found in it. Works made in the working period in the Künstlerhaus (artist’s house) Schloß Balmoral in Bad Ems particularly show a tragic side in addition to their frivolous character. This ambivalence can already be seen in the “Witte Bomen” (White Trees) photograph from 2000. Nothing has been stage-managed in this work, as opposed to earlier work. It is the registration of an orchard somewhere in central Europe, the tree-trunks of which have been painted white. The colour white may be connotated to feelings of happiness and peacefulness, yet it is unclear what white represents. The elimination of these trees, perhaps? Are they by any chance sick and branded? Does this reality, though poetic at first sight, have a black rim?
During her stay in Bad Ems, Oosting created a work called “Bad Süß” (2001, 28 x 240 x 60cm): an archetypal city was built on a solid rectangular table. This work, however, consisted merely of sweets in stead of plastic. Different types of buildings were constructed of cookies, cake, bonbons, marzipan, and all kinds of sweets. Not uncommonly, inspiration for her work comes from youth experiences; in this case from visits to German patisseries.
“Bad Süß” looks tempting and unmistakably incites associations with the conveniently arranged realities of our childhood. This work also incites imagination and feelings of freedom, but for how long? Physical beauty perishes, as do memories!
Does the ideal world many of us knew during our childhood prove vulnerable after all? It seems Oosting crumbles the building stones for a high-quality existence. “Bad Süß” may be attacked by human appetite in one single bite. The sweet city will entirely decay in an organic way and the pastoral of its existence will be momentary. The same applies to the “Zuckerberg” (sugar mountain) from 2001 and to “Ein Berg zum Essen” (A mountain to eat) (2001, 50 x 60 x 50cm). This work consists of cake, chocolate, and powdered sugar, prepared by Oosting for a meeting of regional dignitaries in Bad Ems. The wonderful reality of these works is merely temporary and extremely perishable.

The form of the latter two mountains strongly reminds me of the tower of Babel painted by Pieter Brueghel de Oudere in the 15th century, for instance. Another, papier-mâché, mountain by Oosting, called “Berg und Autobahn” (Mountain and motorway) (2001, 119 x 380 x 360 cm) also has this characteristic form. The mountain is planted with plastic trees, encircled by wood power pylons and surrounded by a winding motorway on high stands. Some artists depict the tower of Babel with a road circling around it. The tower was built by humans in order to reach up into heaven. God punished them for their pride by confusing their languages which made it impossible for people to understand one another.
It may be that the idyllic realities Oosting is referring to in her work are deceptive and can lead us astray. Still, her visual language is clear enough, and the imagination stirring enough to prevent people from being discouraged by these ponderings.
Dineke Oosting likes watching; a reason for us to fully enjoy her visually stimulating and highly imaginative, and sometimes very tasty, worlds. 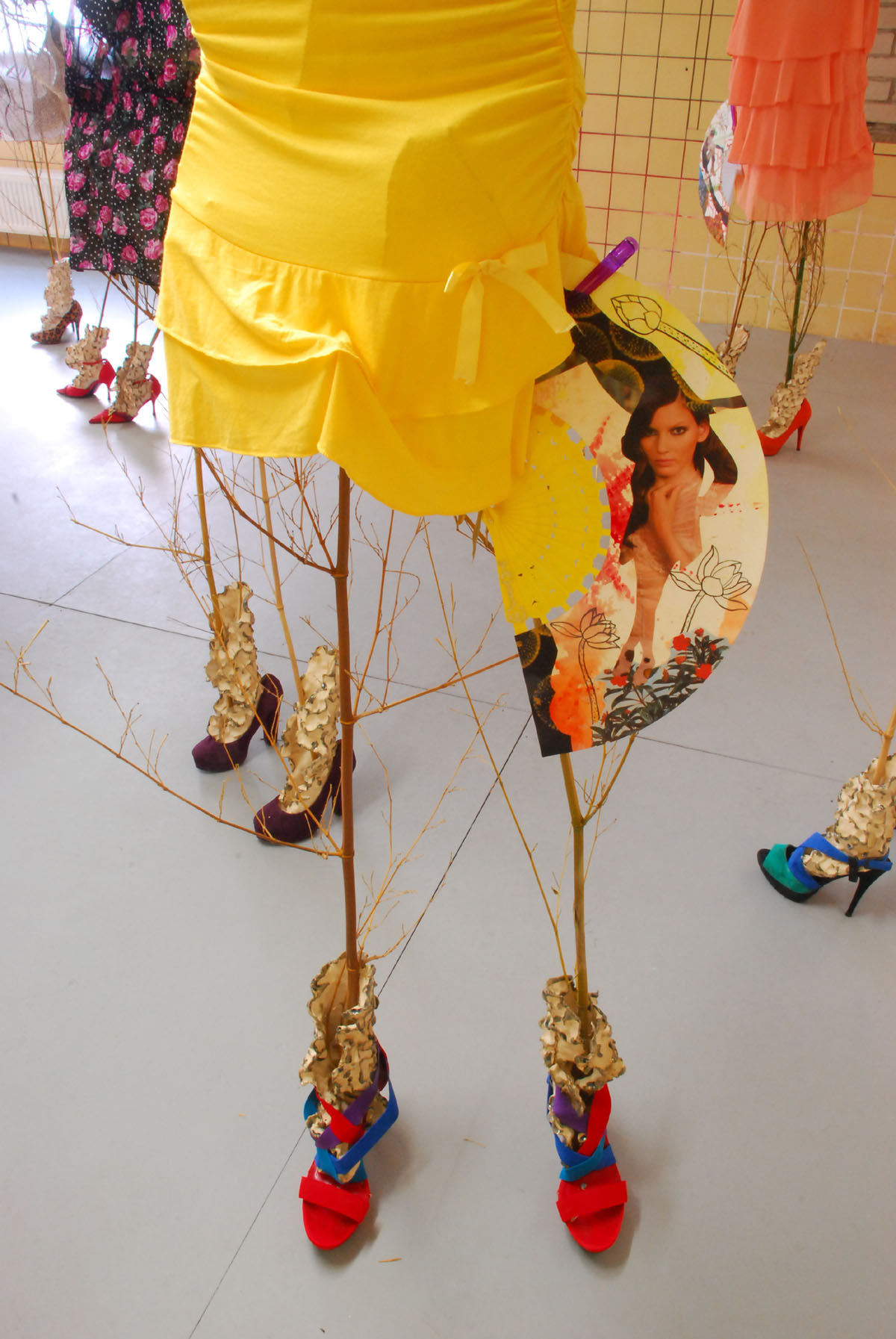